View My CPDnext
Log in Join us
subjects
cpd types
about

Purchases and sales in foreign currency create "transaction risk". And that may apply to more organisations than you would think.

Every organisation has a currency in which it expresses its accounts, balance sheet, profit and loss, cashflow and tax return. If all sales and purchases, and assets and liabilities, are directly expressed in the same currency, it may manage to have no exposure to changes in the exchange rate between its base currency and any other currency. This is far from certain, however, as we will see.

However, if our lucky organisation, apparently with no foreign currency exposure at all, then discovers a source of supply for one of their inputs where the supplier is foreign, the issue of foreign exchange will, of course, need to be considered – because the supplier will be considering it if you try and get them to quote in your currency instead of their own.

The base price will be the one quoted by the supplier in their own currency and with delivery "ex-works", meaning the buyer collects the goods at the supplier's premises and contracts for and pays for all freight, insurance and related costs to get the goods to their own premises. Where the buyer can get a quotation for the ancillary costs that is expressed in their own currency, this may appear to exclude foreign exchange risk, unless the costs arise in a different currency and the service provider has rolled their own hedging costs in, for example airfreight billed in EUR but actually priced in USD.

Having ascertained a price split between the base supply in the supplier's currency and ancillary costs in your own currency, it can be tested against:

A CIF price will get the goods to a port, terminal or airport in your country, and you could then send your lorry there to collect the same way you might for any domestic supply.

Then you are in a position to work out the hedging margin that the supplier is adding to both the ex-works cost and the additional shipping/insurance costs in order to quote in foreign currency.

If you can do the hedging more cheaply, it would be better to take up the quotations in foreign currency than to agree to pay in your own currency.

Selling in a foreign currency

When it is your organisation that is considering making a sale in foreign currency, you are simply in the position of the supplier in the above example. As such, you should position yourself so as to be able to quote:

If you then make the sale in your own currency and on an ex-works basis, it is the same as a domestic sale, but any other combination will entail foreign exchange considerations:

Having collected, for both the case of a purchase and of a sale, all the pricing data, and having access to today’s exchange rate, you can work out what price adjustments have been made to the components in foreign currency.

Today's exchange rate is the price agreed today for delivery in two business days' time. This is known as "spot", and is the anchor price upon which all others are based (for future delivery, for options etc).

For example, for a sale by a USD-based organisation to one in the Euro area, where the shipping/insurance costs equate to USD2,350 if paid by the seller, and the spot rate for USD/EUR is USD1 = EUR0.7820, we could compose this grid from the supplier's quotations made in USD: 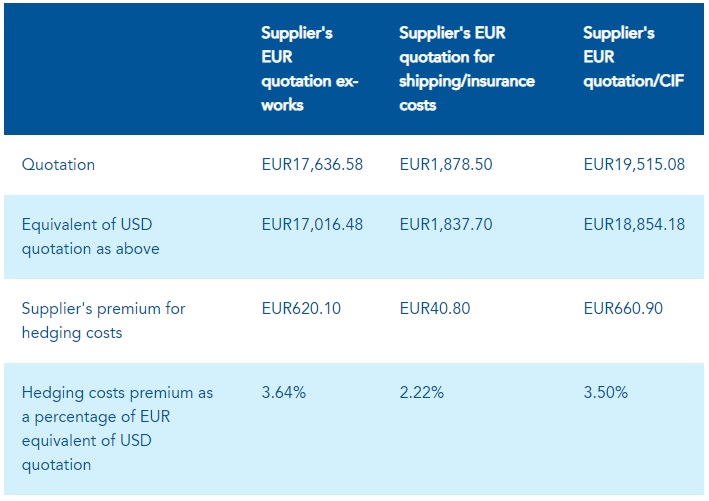 3.50% sounds like a standard mark-up but this is in effect the addition that the supplier will make if they have to take the foreign exchange risk by agreeing the deal in your currency, so you need to calculate whether that is a fair mark-up or whether you can do better.

Bob Lyddon is an author for accountingcpd. To see his courses, click here.